The historic town of Echo is located in northeast Oregon, eight miles south of Hermiston and 20 miles west of Pendleton amid rolling farmland along the banks of the Umatilla River.

While not visible from the freeway, Echo is only a mile from exit 188, where I- 84 and Hwy. 395 meet. The town's population is 715 within the city limits and 1,200 within the library service area. Echo is known for its rich history and many historic sites. J.H. Koontz platted the town in 1880. He named it for his then three year old daughter, Echo.

More than a century later, Echo Koontz Miller is featured in our city logo.

The Oregon Trail passes through Echo. Emigrants crossed the Umatilla River and camped at a site known as the Lower Crossing. Sometimes the emigrants would camp here for a few days to refresh their animals, do laundry or trade before starting across the dry, dusty desert to the west. This campsite is now the site of the Fort Henrietta Park, a National Historic Oregon Trail site. Exhibits at the park include a covered wagon display, interpretive panels with historic information on the trail and town history, Oregon Trails signs, antique fire equipment and RV Park and campground. 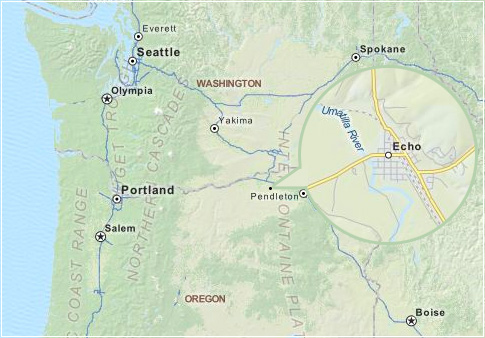 The Utilla Indian Agency was built near the crossing in 1851. It was the first agency for the Cayuse, Walla Walla and Umatilla tribes. Many emigrant diaries mention this first building, as it was the first frame building they had seen since leaving Fort Laramie. A post office was operated from the agency in 1852 and the agency also served as a trading post. It was destroyed during the Yakima Indian Wars and Fort Henrietta, a militia stockade, was built on the site of the "still smoldering agency" in 1855. The agency/fort site is now an archaeological site excavated from 1985 until 1990.

Emigrants began leaving the trail and settling the Echo area c. 1860, making the Echo Meadows one of the first agricultural sites in Umatilla County. Hand dug irrigation ditches provided alfalfa, corn and other crops during these early years. Later, the Echo area became the center of a huge sheep ranching area.

The town was not established until 1880. The railroad which was built through Echo in 1883 brought prosperity. By 1907 the town was a major shipping point for wool, cattle and sheep with a thriving business district. The town was incorporated in 1904.

Visitors to Echo can step back in time through any of ten National Register of Historic Places' buildings in the city.
Click below to learn more about each location including, history, hours of operation, maps and directions.

Built by J.H. Koontz in 1882 and was added to the National Register in 1997, the building is a Greek Revival style. The building is currently vacant, while it is being renovated, but has been a popular restaurant & lounge until recently .

The porch and balcony in the historic photo (right) c. 1950 were pulled down by a runaway horse and wagon soon after the photo was taken. The building was also home to the undertaker, whose workshop was on the third floor.

Some former employees believe the building is haunted and it does have an interesting history, which included finding bullet holes in the wall that give credence to a local story from the 1920s.

The owner, Joseph Cunha, was a Portuguese immigrant from the Azores, who came to America as a stowaway on a Boston-bound ship. Through hard work and intelligence he built up a ranch and business operation that was one of the largest in the county. He was instrumental in construction of St. Peter's Church and the Echo Bank Building.

Built in 1916, Echo City Hall underwent renovation that was completed in 2000. The building has many Mediterranean features including the cupola, parapet and arched entrance, and is classed as beaux-arts style.

The Echo Bank Building, constructed in 1920 by Joseph Cunha, was opened in 1921. It is an example of the Roman Classical style of the 20th century. Raymond W. Hatch designed the building. The exterior is glazed terra cotta and brick. The interior features marble flooring and iron-banking teller’s cages.

The bank is now a museum.

The bank as a business, was incorporated in 1905 by local ranchers and in 1933, though still solvent, was closed by its founders. Echo businessmen bragged that the bank survived the depression to be sold to First National Bank of Pendleton.

The building was used as a cash exchange and later as an insurance office. In 1980, Joseph C. Andrews purchased and donated it to the Echo Historical Museum, Inc.

The Echo Methodist-Episcopal Church was built in 1886 on land donated by J.H. & Cynthia Koontz. The church was added to the National Register of Historic Places in 1997. The church is a New England-Style Church with gothic and craftsman elements.

Before the church was constructed, services & revivals were held in a grove of trees called Spike's Grove, located south of town in a Cottonwood Grove along the Umatilla River owned at the time by Elvira Teel and later her daughter and son-in-law Elmer & Pamela Spike. The first minister of the new church was Rev. H.F. Williams, L.D.

In 1910 the Koontz family donated more land and a wing was added to accommodate the growing congregation. The old tower was removed and a new, larger tower with crenelated top was built which, with the added wing, resulted in an asymmetrical building. Two large windows were modified with an arched top light.

Built in the 1860s, this commercial building housed a number of businesses including the Echo News. W.H. Crary operated the newspaper from the ground floor and lived above for many years. It was also used as a second hand store, a Japanese restaurant and even a 1910 Sanborn Maps business. It is now an apartment building.

The building may have been moved from Umatilla City in the 1880s.

The Linden tree in front of the building is on Echo’s Heritage Tree List and was planted by W.H. Crary himself. A marker on the tree provides additional information.

Built in 1904-05 by J.H. Koontz, this beaux-arts styled building served as a general store and feed and seed. Son-in-law, Charles Miller, and F.T. George then operated the George & Miller Store until their new building was finished in 1910 on Bridge Street.

Then came the O.B. & Bob Store. At some point the building was converted to a restaurant, then bowling alley. After the bowling alley was closed c. 1972, the building became a fiberglass factory for constructing satellite dishes and boats.

The city of Echo sold the building in 2009, Renovation was recently completed and building unveiled as the new home of Sno Road Winery and tasting room.

This Koontz House site has four contributing buildings. Built in 1881 in the Italianate style, the house is one of the finest examples of this style in Umatilla County. The ornate brackets, wide eaves, turned posts and fancy balustrades further mark the house as one whose owner was wealthy and able.

The features of the house combine to denote it as one of the finest of its time.

Built in 1913 in the Portuguese Colonial Revival style, the building features a stucco facade. The church is no longer used for services and was donated to the Fort Henrietta Foundation, which is trying to raise funds to renovate the building.

The interior of St. Peter's Church includes a faux marble altar and ornate statuary, as well as a full compliment of stained glass windows.

The Masonic Lodge was built circa 1868 in Umatilla Landing, making it the second oldest Masonic Lodge in Eastern Oregon. When the railroad was constructed, Umatilla Landing followed the course of many boom towns and boosted. The county seat was shifted to Pendleton and many of the buildings were abandoned.

The Lodge was taken apart, the pieces marked, loaded on a railroad car, and moved to Echo in 1906 where it was reassembled. The total cost was approximately $160. The lower floor was rented to businesses (one was a pool hall that sold Near Beer) and the top floor used for lodge activities. In 1910, the lodge members paid to have a basement dug and the building was moved 50 feet south to its current location .