Echo is known for its rich history and many historic sites. The Oregon Trail passes through Echo. Emigrants crossed the Umatilla River and camped at a site called the Lower Crossing.

Sometimes the emigrants would camp here for a few days to refresh their animals, do laundry or trade before starting across the dry, dusty desert to the west. This campsite is now the site of the Fort Henrietta Park, a National Historic Oregon Trail site.

Exhibits at the park include a covered wagon display, interpretive panels with historic information on the trail and town history, Oregon Trails signs, antique fire equipment and RV Park and campground.

"... saw at the river a house. The first building that looked civilized since Laramie."

The Utilla Indian Agency was built near the crossing in 1851. It was the first agency for the Cayuse, Walla Walla and Umatilla tribes. Many emigrant diaries mention this first building, as it was the first frame building they had seen since leaving Fort Laramie.

A post office was operated from the agency in 1852 and the agency also served as a trading post. It was destroyed during the Yakima Indian Wars and Fort Henrietta, a militia stockade, was built on the site of the "still smoldering agency" in 1855. The agency/fort site is now an archaeological site excavated from 1985 until 1990.

Emigrants began leaving the trail and settling the Echo area c. 1860, making the Echo Meadows one of the first agricultural sites in Umatilla County. Hand dug irrigation ditches insured water to grow alfalfa, corn and other crops during these early years. Later, the Echo area became the center of a huge sheep ranching area.

While settlement began in the 1860's, a town was not platted until 1880. J.H. Koontz and W. Brassfield platted the town in 1880 and named it for Koontz' 3-year old daughter, Echo. The railroad which was built through Echo in 1883 brought prosperity.

By 1907 the town was a major shipping point for wool, cattle and sheep with a thriving business district. The town was incorporated in 1904.

The Echo Story, Volume I
Early Days to Arrival of the Railroad 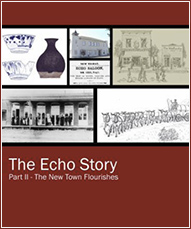 Each title can be purchased for $15 plus shipping from:

Excerpts from the Books